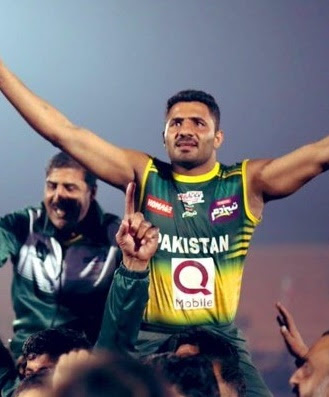 Kabaddi is a very famous game in Pakistan, especially in Punjab. So, World Kabaddi Federation Rana M. Sarwar says that Asia Kabaddi Cup 2022 and Kabaddi World Cup in 2024 will be held in Pakistan.

It is an honour to us that foreign country players will be paly there.

Pakistani are fond of Kabaddi very much so Rana says that Pakistan’s win in World Cup 2020.

I hope very well that Pakistan also will win this Asia Cup 2022 and World Cup 2024. Because this is our Home Ground and our beloved country Pakistan.

Pakistan is very excited to host both World Cups (2022,2024). This is amazingly good news for Pakistan and kabaddi fans. Now Pakistan is great strength in the kabaddi world and that is apparent from our success.

And for both the major events to be held in Pakistan within the next 3 years. So that’s why it is amazing news for Pakistan and Pakistani kabaddi fans.

So you all know very well when a great event will become near then people starting its preparation before. So Rana says that few international matches between Pakistan and India will be held in Kartarpur Corridor after few months.

Some matches will be located in Nankana Sahib International. Some other matches also will play Pakistan with other international teams.

As mentioned earlier that Kabaddi is famous in Pakistan and India and they both playing with spirituality.

You all know very well that these matches are very big responsibilities. So Rana says that Pakistan Kabaddi Federation President Ch. Shafy Hussain had been guaranteed that these events will be a great success.

No one would be hurt by these events. All matches would be playing fairly.

He also doing started many efforts now, these efforts show that our president also exciting about these matches and this amazing event.

This is a fact that when a big event is held internationally then the president of that event is not enough. So Rana says Pakistan Olympic Association(POA) and Pakistan Sports Board(PSB) doing their contribution to these exciting events because without their aid.

I think these events will not be successful and it also the duty of POA and PSB. I am pretty sure that both sectors will be contributing well.

Pakistan is a developing country and when a big event is held then there is always the budget issue that happens. So Rana says that the federation had also been competing for financial issues.

There is a lacking of funds which restricts our progress as well as the development of the nurseries at the grass level. Because in Kabaddi the grass and soil matter a lot.