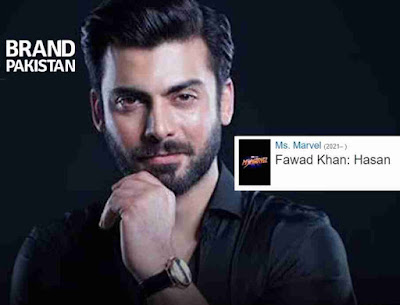 You know very well about Fawad Khan. He is a film actor superstar of Pakistan. He acts in many Pakistani dramas, movies, and other serials.

He works in the Indian Bollywood industry as well so here is the first Hollywood movie for Fawad Khan that has been confirmed.

Fawad Khan said that it is very honour for me that I am now work in the Hollywood industry.

He said that Marvel is my favourite Hollywood series and I am now very happy and excited about doing work in it.

You heard the news that the Marvels team making a movie Ms Marvel in which Fawad Khan acts. There are about 23 movies released of Marvel series till now.

Fawad Khan said that I am already watched all Marvel movies and I understand all the stories very well.

Fawad Khan starts his acting career in India. You know very well that India is very famous for its movies and cinemas.

There are over many movies made in India within a month since 19,s. So at that time when Fawad Khan started his acting career there a large scope of movies in India.

So Fawad Khan could take this opportunity and get benefits. His most famous movies are Kapoor and sons & Khubsoorat.

He also works in many other Indian dramas and serials but he is famous for these two movies. He is very handsome and also knows as a dashing superstar.

By entering Fawad Khan in Hollywood many other Pakistani actors are possibly chance in this Marvel series for sure.

Because BBC news said that there are possibilities that other Pakistani actors will also be a part of this movie.

Further said that Samina Ahmed, Nimra Bucha, and Farhan Akhtar are the actors that will be possible to act in this movie.

After hearing this news they said that it is very honoured for us and we are excited to act in this great blockbuster Hollywood movie.

This is a fact that in Hollywood movies there is a very big budget movie and trending throughout the world.

By act in this movie, they are all gain a lot of money and most important thing they get more and more fame as well.

As an actor you should be the focus on one thing is that the fame and trying hard not to viral your scandal.

Because by viral your scandal you should not get a chance in even a small drama serial.

Because after viral your scandal public should hate you and no one director should cast you.

Because after cast you, he gets more hate and violating comments and the public doesn’t watch his movie as well.

The most important thing no one brand should invest in you and sponsorship would be dead so your career would be finished.

After the news of Fawad Khan that he act in a Hollywood movie, their fans give him a lot of congratulations and very happy.

Fawad Khan is now top trending on every social media and news. His fans are excited about this amazing movie.

Because they’re a lot of fans of the Marvel series and every time marvel series break the record of previous movies.

Now let’s see what happened this time. Because this time is special thing is that Pakistani actors would be acting in it.

This is the first experience of all of them. Fans further said we pray for them all that they will all be doing their best. So best of luck to you all.