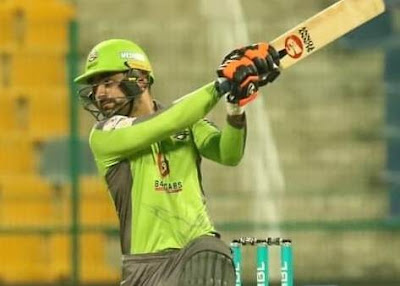 You all know very well that PSL season 6 stopped in March 2021 due to Covid. So after a long break, the wait is over and yesterday again PSL started.

Yesterday there was a stunning match played between Lahore Qalandars and Islamabad United.

He performed with the bat in the last thrilling over to lead his side to an unbelievable win. At the start of the match, Lahore Qalandars win the toss and choose to field first.

Islamabad United lose their first 5 wickets so early then after 20 overs there was the target of 144 at the loss of 9 wickets.

Then Lahore Qalandars start very well but after 10 overs they would be slow and the match was in last over.

In the last over 16 runs were required and 5 wickets down. Hussain Talat did the last over and in the strike, there was Rashid Khan.

In the first 3 balls, Rashid Khan hit well for fours then he took single and double. In the non-striker end, there was Tim David. He also played very well and Lahore Qalandars win the most thrilling match.

It was so easy after a well-disciplined blowing performance the Lahore Qalandars trying hard to get off the blocks wonderfully.

This is the fact that it was moored a little too safely by Mohammad Hafeez and Captain Sohail Akhtar with 6 balls to go victory was pretty sure for Islamabad United.

But there was a twist that an amazing and thrilling second last over by Hassan Ali was destroyed by a six on his last ball.

Might possible it forced the player to give Hussain Talat his last over and also the last over of the match.

After the win, the Rashid Khan said that now then who thought that the low-scoring amazing quite the game that we have today even there is the over rates leave a lot to be wished.

Rashid Khan once again proved his strength as a batsman. He is almost taken for a good hitter and played well as a bowler.

Further, Rashid Khan said that I think it was believed in my hits that got me the runs and especially to a recent bowler so I took him on and played very well.

I keep adoring myself instead of the responsibility and it’s crucial that not to burden myself.

It is very crucial to up your hand and go there to good play for your team as well. You all know very well that best fielding gives you the extra energy and brings the best out of you in other aspects.

Shadab Khan who is the captain of Islamabad United said that when I was bowling then I had surely left one over for myself for the end of the match.

When the dew came in then it got not tough to play the slow bowlers. I had confidence in Hussain Talat as well and if I had to do it again then definitely I would back him again.

We have definitely to forget the phase of Karachi and it is very difficult to play for the new coming batsman but It will get easier once the dew sets in for batsman but we never complain about that.

The struggle is in our hands and we presented it but the results were not in our favor. Might possible it will be later in the tournament.

Sohail Akhtar who is the captain of Lahore Qalandars said that we gave away surely 15 runs more than we should have at a specific point.

He also said that no doubt we have the good fast bowlers in the world at the instant and we will plan to pick the slow bowlers when required.